Years ago when the nieces and nephews were toddlers, I made rag dolls for most (if not all), including the boys. If memory serves, Mom had a McCall’s rag doll pattern that she had gotten on sale and that was the one I used. 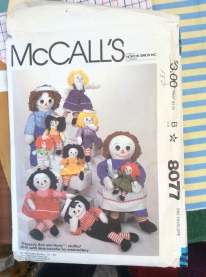 Later when the grand “nephlings” were born, I sewed again using the same pattern and the pattern was again resurrected for Operation Christmas Child in August 2016.

I also had a book about making stuffed dolls from several years ago that came in handy too.

I had read online that doll bodies should be made from tan or brown fabric so I tried tea-dying muslin and used that for one doll, but the fabric seemed to loose some of its strength. I decided to make the rest of the rag dolls with off-white muslin that I had on hand. 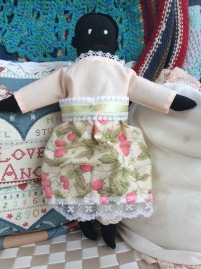 Later I did make one fourteen inch black fabric body following instructions in my doll making book, but I thought she was a little large to comfortably fit into the shoebox. 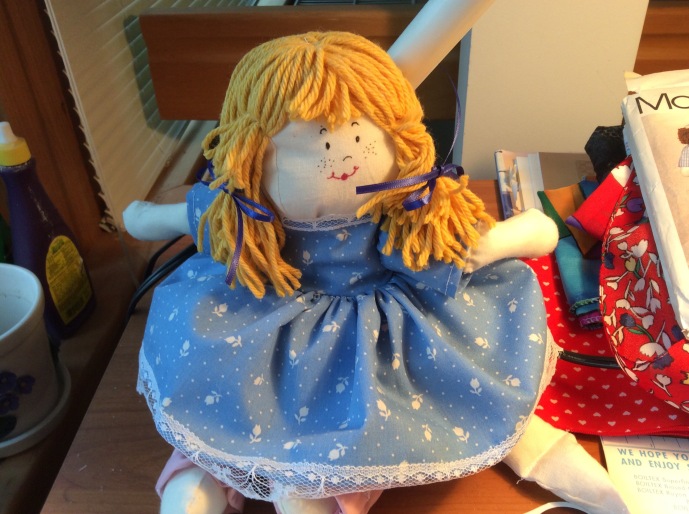 I also made a ten inch doll following my book’s instructions for “Amy”, one of the redheaded twins (mine was golden haired), but her head was pieced and a bit more finicky.

I used scraps from a pink sheet to make the doll’s legs (the pink was leftover from one of my sister’s old projects). All of the dresses and bloomers were made from my fabric stash, which included some bits from my sister, sister-in-law, Mom, a neighbor’s yard sale, and leftovers from my quilting projects.

For trims for the doll’s clothing, I was fortunate to chose from Mom’s two big sewing boxes full of laces, rick rack, buttons, thread, elastic, snaps, and other little goodies. I found the sewing very therapeutic!

I used most of one bag of polyester stuffing (thanks to Mom). After making one doll from start to finish, I worked factory style, cutting out all the body parts, turning them all inside out–

Doll arms, legs, and heads waiting to be stuffed

(tedious but a good job for sitting out on the deck on a warm day;made a lot easier with the help of a chop stick and a straw-like piece of copper tubing), and then stuffing all the little arms and legs. Next it was back inside  to the sewing machine to sew the body parts together and finish the stuffing.

I did several yarn hairstyles using bits from my yarn stash. The original pattern called for sewing loops which were then cut. I found some other suggestions online. The hair does take some time, but if it was a nice day I did my styling outdoors.

Waiting for her face after getting her hairstyle

Just how to make the doll’s face puzzled me. After looking at their blank stuffed faces for awhile, I finally opted for satin stitch simple eyes and a straight stitch mouth One was just drawn by tracing a facial features pattern with a fine line permanent marker.

Sewing the doll’s clothing was probably the most fun. I worked assembly line style most of the time. I pieced fabric for the dresses often which gave me a seam down the front of the dress, but I don’t think it is very noticeable and piecing let me use more of my smaller pieces. I added lace or rick rack to every dress. The bloomer pattern in my book was simpler than the McCall’s pattern. I did not make any aprons this year.

I thought about naming each doll or autographing the doll, but opted not to this year. I have named the dolls in my mind however. I like to think of them as “Dorothy Dolls” which is my mother’s name. 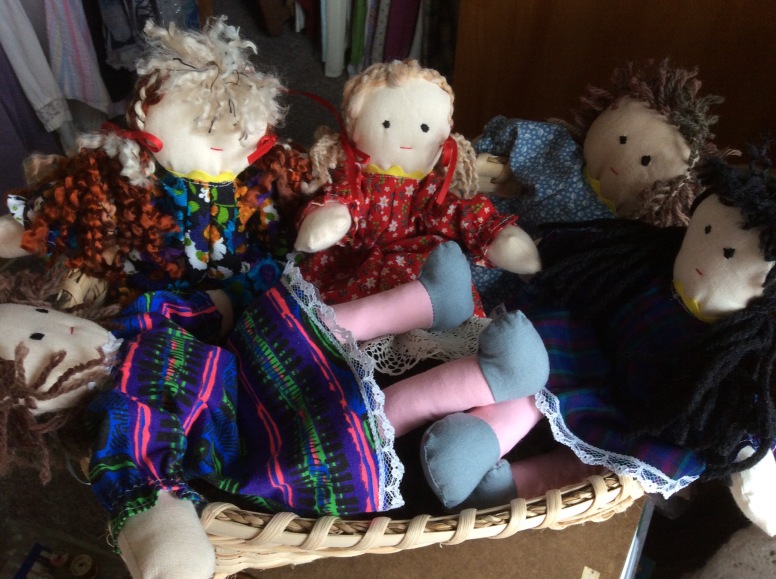 Sewing: How to make doll’s hair

Fast and easy way to make doll hair with yarn